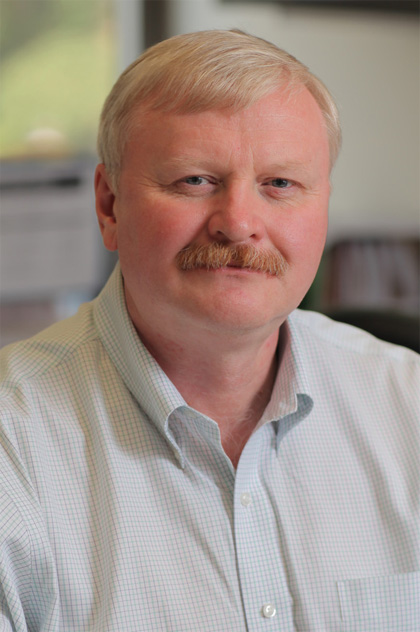 Pharmacological inhibition of lipofuscin accumulation in the retina - Experimental and clinical imaging data indicate that high levels of lipofuscin induce degeneration of RPE and the adjacent photoreceptors in atrophic AMD retinas. In addition to AMD, dramatic accumulation of lipofuscin is the hallmark of Stargardt’s disease (STGD), an inherited form of juvenile-onset macular degeneration. The major cytotoxic component of RPE lipofuscin is a pyridinium bisretinoid A2E. A2E formation occurs in the retina in a non-enzymatic manner and can be considered a by-product of a properly functioning visual cycle. Given the established cytotoxic affects of A2E on RPE and photoreceptors, inhibition of A2E formation could lead to delay in visual loss in patients with dry AMD and STGD. Partial visual cycle inhibition with small molecule drugs may reduce the formation of A2E in the retina and prolong RPE and photoreceptor survival in patients with dry AMD and STGD. Using the grant support form the new NIH initiative, the Blueprint Neurotherapeutics Network, Dr. Petrukhin’s lab is working on optimization of a non-retinoid lead compound that acts as an inhibitor of bisretinoid formation in the retina. In addition, we are conducting evaluation of novel drug targets for pharmacological inhibition of retinal lipofuscinogenesis.

Photoreceptor protection - Atrophic AMD is a slowly developing neurodegenerative disease in which photoreceptors in the central part of the retina are lost due to apoptosis. Delaying or preventing the loss of photoreceptor cells in the macula would predictably lead to delay in AMD progression. Nuclear receptors comprise a family of transcription factors involved in regulation of a variety of biological processes including cell survival. Ten percent of the most widely used drugs are nuclear receptors modulators indicating the importance of this group of ligand-dependent transcription regulators as drug targets. NR2E3, also known as PNR and RNR, is an orphan nuclear receptor expressed exclusively in photoreceptor cells of the adult and developing retina. Physiological ligands for NR2E3 remain to be identified. Mutations in NR2E3 have been associated with several forms of retinal degeneration in human patients. It has been suggested that in addition to its role in retinal development, NR2E3 may be involved in photoreceptor maintenance in the adult retina. The phenotype of the late-onset, slowly progressing retinal degeneration in rd7 mice, which harbor a spontaneous deletion within the Nr2e3 gene, seems to be consistent with the dual function of this nuclear receptor in retinal development and photoreceptor maintenance. The expression profiling experiments in Dr. Petrukhin’s laboratory suggest that NR2E3 directly regulates the genes that may be involved in protection of the retina from oxidative stress. Using NIH funding, Dr. Petrukhin’s laboratory is conducting the screen for synthetic NR2E3 ligands that may potentially become a treatment for atrophic AMD.

Downregulation of gliotic response in the retina - Gliotic response in the retina is a sequala of many retinal diseases including atrophic AMD. Muller glial cells are responsible for the extraordinary range of functions within the retina such as mediation of photoreceptor survival, synthesis and renewal of visual pigment, neurotransmitter recycling, removal, and protection of neurons from potassium toxicity. Given the fact that Muller cells are significantly involved in the processes of retinal dystrophy and taking into account examples of successful neuroprotection in CNS by downregulation of reactive gliosis, it is plausible that reduction of Muller cell gliosis may represent a new therapeutic area in atrophic AMD. Gliotic response in Muller cells is triggered in part by impaired retinal K+ homeostasis associated with downregulation of Kir4.1 channels responsible for release of potassium from Muller cells into circulation. Reduced ability of damaged retina to buffer potassium elevates intra-retinal K+  level and induces Muller cell swelling which was shown to stimulate dedifferentiation and proliferation of Muller cells. A fluorenone drug known as DPOFA, (R)-(+)-(5,6-dichloro 2,3,9,9a-tetrahydro 3-oxo-9a-propyl-1H-fluoren-7-yl)oxy]acetic acid, was shown to be highly effective in inhibiting K+-induced swelling in CNS astrocytes. The drug demonstrated significant efficacy in preventing mortality in animal models of concussive brain injury and was systemically administered to humans in Phase I clinical trials for trauma-induced brain edema. As gliotic response in retinal Muller cells and CNS astrocytes may have overlapping, if not identical, mechanisms we hypothesize that DPOFA (or its derivatives) may be used as an anti-gliotic therapy in patients with dry AMD. Dr. Petrukhin’s laboratory is performing evaluation of DPOFA and its analogs in in vitro and in vivo systems modeling gliotic response in the retina in order to develop rationale for the use of fluorenone drugs as a treatment for atrophic AMD.